Cigarette butts are arguably the most infamous type of litter. By some estimates, 4.5 trillion cigarette butts are incorrectly disposed of each year. Since the Ocean Conservancy carried out its first coastal cleanup effort in 1986, cigarette butts have topped their list as the most common item collected from beaches and waterways every year—until now. For the first time in the environmental nonprofit’s history, food wrappers were the most collected item from the annual cleanup, a sign of how huge our single-use packaging problem has become.

Each year, the Ocean Conservancy organizes the International Coastal Cleanup, a global effort to rid the world’s beaches and waterways of trash. For 2019’s cleanup, more than 940,000 volunteers in 116 countries collected nearly 32.5 million pieces of trash, according to the nonprofit’s report out today. That includes a record 4.7 million food wrappers—packing for candy, chips, and so on— along with 4.2 million cigarette butts, 1.8 million plastic bottles, 1.5 million plastic bottle caps, and more than 940,000 straws and drink stirrers. 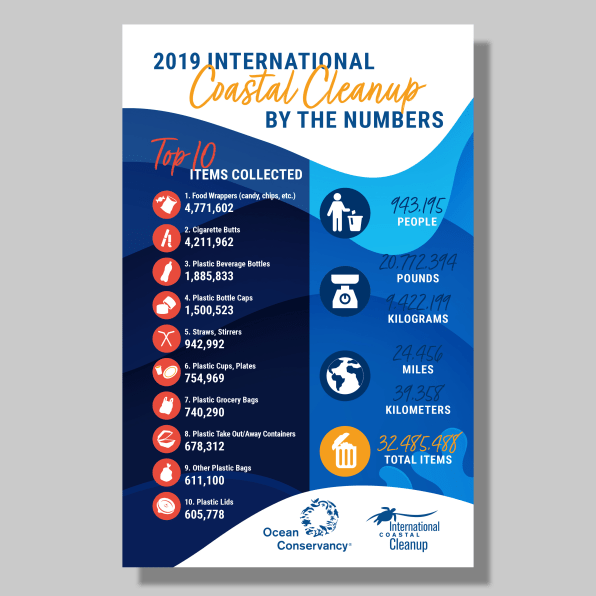 Outside of cigarette butts, food and beverage items have long made up the most of this trash. But out of all of that litter, food wrappers are uniquely challenging, says Nick Mallos, senior director of Ocean Conservancy’s Trash Free Seas program. “We can recycle plastic bottles, we can bring our own bags to the supermarket, and many of us skip the plastic straw all together, but when it comes to keeping food fresh, safe, and accessible, to date manufacturers have put most of their research and energy into the food wrapper [in its] disposable plastic form,” he says. “We really need to think about accelerating research and development of packaging that isn’t destined for landfills and that keeps both people and our oceans safe and healthy.” 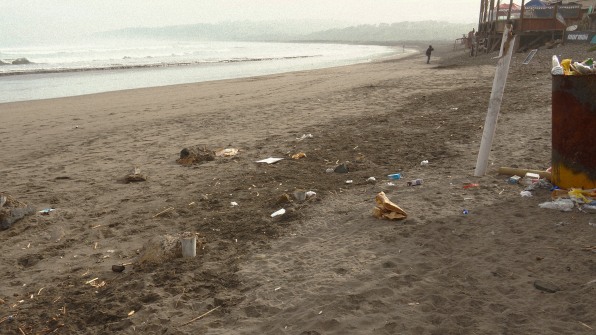 Over the years, the Ocean Conservancy’s cleanup has revealed our switch to single-use plastic and its detrimental effect on pollution. In the early days of the effort, Mallos says, glass bottles, metal caps, and paper bags were prevalent in the top collected items. Over the last decade, though, they’ve fallen out of the top five, and their plastic counterparts moved up the list. But 2017 marked the first time that the entire top 10 list of collected trash was plastic (cigarette butts count as plastic trash; the filter inside is not cotton, but plastic fibers) and it’s remained that way ever since. Some the decline of butts is also attributable to people smoking less, but plastic is also rising: According to last year‘s report, there were 5.7 million cigarette butts and 3.7 million food wrappers picked up in 2018, out of 25 million pounds of trash

The issue of single-use plastics, especially food wrappers, is both a design and a recycling problem, which is why Mallos highlights the need for different types of packaging and better management of this waste, so we can move toward a circular economy. Cleanup efforts are only a band-aid, not a complete solution.

“With food wrappers taking over the number one pollution spot, it really underscores the unsustainable production of single-use disposable food and beverage packaging that’s not recycled or nonrecyclable in most cases, as well as the gross inadequacies to responsibly manage this plastic waste in almost all communities around the world,” he says. “We need to really solve this problem upstream so that plastics never enter our waterways and never reach the beaches in the first place.”

September 2020 marks the 35th International Coastal Cleanup. This year, Ocean Conservancy is encouraging volunteers to do individual or socially distant cleanups or, if people don’t feel comfortable going out in the pandemic, the nonprofit has suggestions for how they can take action at home. Ocean Conservancy has also updated the app volunteers use to catalogue the trash to include a new category for PPE, so we can better understand how those items are impacting our environment.

For a cleaner future

10 Plastic Pollution Facts showing why we need to change our behaviourProgressFor a cleaner futureMar de plástico, Almeria
We use cookies to ensure that we give you the best experience on our website.
Facebook Instagram